I have been waiting to post this one because I needed to ID this bug. Thanks to a FB friend, I finally have it. It's a Jagged Ambush Bug.A couple of weeks ago, I saw something strange. I little skipper (type of small, fast flying butterfly) just sitting still on my Butterfly Bush. It sat still long enough for me to get a macro pic of it. That's when I really began to wonder if it was dead. When I touched it, it moved a bit. I tried to get it off of the flower, but it seemed stuck. I pulled it off. Then, to my surprise, I found that it had not been 'stuck', but caught, by this little guy. They tuck themselves into flowers and wait to ambush an unsuspecting insect. It has forelimbs similar to a Praying Mantis, and being part of the group of bugs known as Assassin bugs, it injects the prey with a toxin that causes paralysis, and liquifies it for easier consumption. It's prey are butterflies, bees, and even wasps!
It flew away after I got it's picture.
Remember to 'like' and 'share' the love of nature! 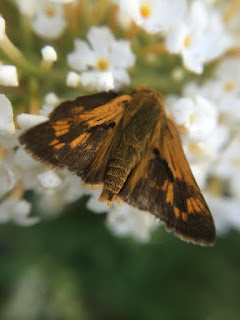 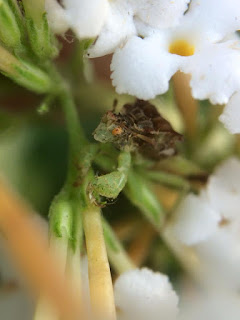 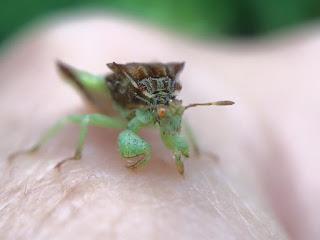 Ambush Bug on my finger 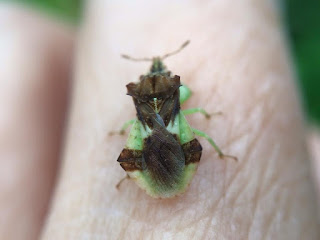 Back of the Ambush Bug

Kim White
I have always been in love with the natural world. My favorite times were when I was at camp walking in the woods, canoeing on a river, looking for tadpoles, turning over rocks to find hidden treasures, watching daddy longlegs, and being next to my grandmother in her farm garden. I strived to give my children these experiences, and now my 4 grand daughters. I volunteered as a docent at Brookfield Zoo for 10 years, followed by 10 years as an employee in their Education Department teaching school groups. I later worked as a tour guide for a pilgrimage company, taking people to Israel, Egypt, and Europe. I then took 4 years off to care for my beloved in-laws. Now, I am back to learning, and teaching about the natural wonders of the world that can be found in our own backyards.